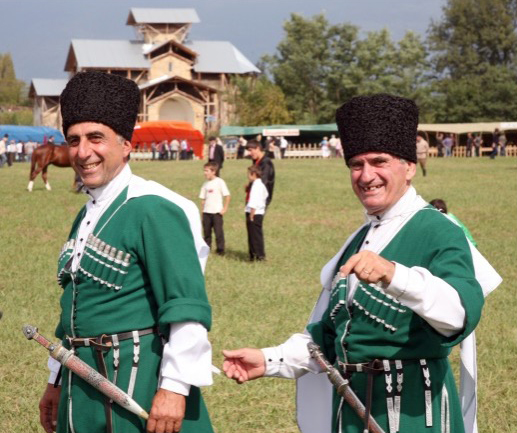 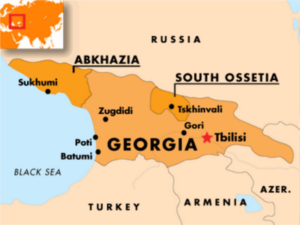 Abkhazia is situated on the south-eastern coast of the Black Sea. In the early Middle Ages there existed an Abkhaz Kingdom at the same time as the Georgian Kingdom. Contacts with Christianity were made early on, as the first missionaries reached the area as early as the first century AD. The first reports of a local Christian congregation date back to the fourth century. The Abkhaz helped to spread Christianity among other peoples of the Northern Caucasus. Like the other northwest Caucasian languages, Abkhaz is very rich in consonants, with 58 of them, but has only a few vowels. In 1810 Abkhazia joined the Russian Empire, since Abkhaz rulers were seeking Russian protection from Ottoman oppression. In 1855 during the Crimean War between Russia and the Ottoman Empire, big battles took part on Abkhaz territory. At the end of the 1850s during the Russian-Caucasian War, several Abkhaz tribes fought against Russians on the side of the famous Caucasian leader Imam Shamil. As a result, in 1864 Abkhazian self-determination was abolished by the Russian tsar. Several anti-colonial revolts broke out and were crushed in the 1860-70s. During all these tragic events, a significant part of the Abkhaz population moved into adjacent Turkey. Despite this, at the beginning of the 20th century the Abkhaz still comprised the majority on their native land. After the Communist Revolution in 1917, Abkhazia joined the Soviet Union, and in 1931 it became an administrative unit within Georgia. During the repressions in the late 1930s and early 1940s forced assimilation and “Georgianisation” of the Abkhaz took place. Many Georgians settled in Abkhazia, and Abkhaz was no longer taught in schools. In April 1989 there were armed clashes between Abkhaz and Georgians. During the summer the conflict escalated, and in August 1990 Abkhazia declared independence. War broke out which lasted until 1992. The new military conflict between Southern Ossetia, Abkhazia, Russia and Georgia in 2008 resulted in the recognition of independence of the Republic of Abkhazia by Russia. There are now a total of 5 member states of the UN who recognize the independence of Abkhazia. The situation in Abkhazia is unstable, and the Abkhaz economy and social life are very problematic. There are serious conflicts in the society, which is divided into clans, and there is also a very strong and deeply-rooted conflict between different groups in the church, which we could even call a split.

The OT translator is the director of the Institute for Humanities Research in Abkhazia, and is therefore very busy in this tremendously difficult administrative position, but he maintains great interest in Bible translation into Abkhaz, which is the real aspiration of his heart. He has translated Jonah and Ruth and has also drafted Obadiah on his own initiative. Ruth, Jonah and “4 Parables from Luke” are being field-tested now. The new field-tester couldn’t come to Abkhazia due to covid limitations, and the field-testing is being conducted by local pastors. Obadiah has been edited. All the team members continue working by Skype, though it is very hard for them to find a mutually convenient time because they all are overloaded with responsibilities and live in very different time zones. The online consultant checking session on Ruth, Jonah and Gospel Parables is planned for the near future. We are planning to publish them in 2021. Translation work has started on Bible Stories.

Our long term plans in this project are to publish the revised 4 Gospels. We also envision continuing work on the revision of the New Testament and on the recently drafted translation of Psalms, as well as other OT portions.